The feast of St. Philip Neri in Brompton oratory 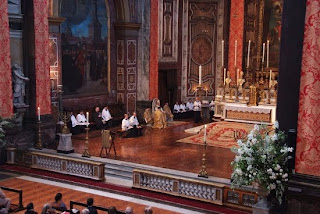 I went to Brompton Oratory last Saturday to celebrate the feast of St. Philip Neri. Although the Holy Mass was NOT what people usually call "traditional Latin Mass", the Mass was celebrated ad orientem and in Latin. I could now describe in great details how encouraging and beautiful was to participate in a Mass, where priest and servers take their role seriously and the entire Mass is celebrated with much reverence and solemnity. That is not my intention however. Instead of writing ecstatic post on the splendour of Saturday's Mass, I would like to offer few controversial points of view for your reflection. Although I support the celebration of  "traditional Mass" as often as possible, I have realized how good and much needed was Vatican II. Here are my arguments:

1) Even in so called traditional Masses, the use of Gregorian chant is scarce. What is used instead is usually some 17th - 19th century religious music. Quite often Mozart, Bach or someone of such calibre. Please note, I have nothing against Mozart or Bach, but their music is not particulary spiritual. Sitting there on Saturday and listening to mostly Baroque music and watching servers in their 19th century rochets decorated by laces, I realized how vulgar and frivolous Baroque period was. Baroque is a synonym for the lack of taste and it was good, that Vatican II tried to eradicate these worldly elements from the Mass. Church is a house of prayer, not a music hall.

2) The cardinal was dressed in this vulgar, ridiculous, Baroque fashion. With servers holding his long veil and pair of richly decorated gloves, he resembled more a member of nobility, than a slave of God. Don't get me wrong - I do understand the reasoning behind such practise; after all a bishop is a prince among priests and in his earthly status equal to Seraphims in heaven. (can't remember exactly the phrase St. John Chrysostom used). However, such pomp looks slightly unnatural and even self-mocking in our times and therefore it was good, that Vatican II brought simplicity back to the Roman rite.

3) On the other hand, the Mass on Saturday was a good example how a Novus Ordo Mass should look like after "reform of the reform" will be accomplished. Mass served ad Orientem, frequent use of Latin, readings read by males serving in sanctuary and the Holy Communion distributed by priests only and not by women (unfortunately a matter of fact in majority of English parishes today). My last objection would be, that the Gospel was NOT read in English. I think possibility of offering the Mass in native languages of different cultures was a good fruit of Vatican II and this fruit should be preserved and cherished; along with the unifying fruits of the Latin language, of course...


I would welcome your feedback on this matter my readers!
Posted by Agent Provocateur at 07:41