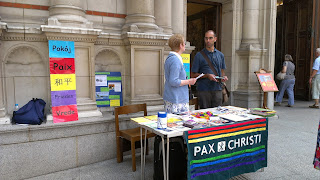 I was passing by Westminster cathedral today and noticed suspicious group in front of the church. They call themselves Pax Christi, which is a very nice name indeed, but not fitting in this case I'm afraid. I asked them why do they display gay badges? The woman behind the table replied "it's a symbol of peace". Something in her look told me it would be a futile attempt to point out that although originally "the symbol of peace"; it became a symbol of homosexual movement. Something about the group didn't feel and look right and after doing a quick research on the Internet, I found out it's basically homo-feminist movement trying to undermine to the authority of the Church from within. More info here:Who are Pax Christi?. Now, let's forget this assembly of dying modernists for a moment...The accident begs the question: Why was it allowed by the cathedral administration????!! One of the ladies confirmed their stand was authorized by the cathedral - was she lying? I don't think so, they had their stand there for a couple of hours and cathedral security would surely act, if they haven't had the permission. And that's what makes me sad - it's not the existence of various bizarre movements claiming to be Catholic. It''s the torturous silence (or even approval) of responsible Church authorities. What happened to priests? Why so timid, why so weak, why afraid to speak??? Where are the courageous shepherd's waiting with sticks in their hands to defend their flocks against the attacking wolves? 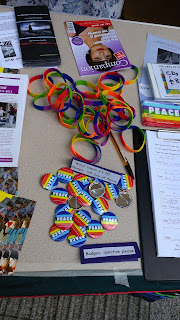 Posted by Agent Provocateur at 16:00