Nuns, sisters and other women 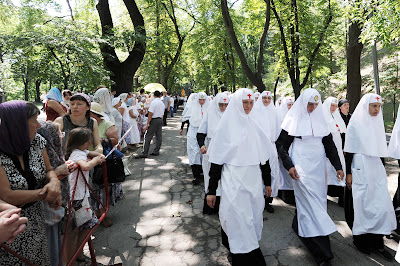 They say one image is better than thousand words and I agree to a certain extent. Today I would like to bring to your attention a problem of our religious female organisation (can't call them orders anymore in many cases). Why do I say the problem? Well, as I said before "one image is better than thousand words" and I leave the images to speak for themselves. On one side we have an army of Orthodox female religious; on the other a group of Catholic religious.The visual difference could not be more striking and this visual representation of their understanding of religious life undermines how each group understands its service to the Church. Talking about current leadership of LCWR; I am not even sure if they really want to serve God in his Holy Church, but that's another issue. I think these images remind us, that no one and nothing exists separately and independently of others. Thus, the religious dress is not just something people use to cover their nudity. No, it's a visual manifestation of one's spirituality. Now, when I gaze at the picture with Orthodox nuns - I see pure beauty. When I look at the picture of nuns on bus; I see nothing but a bunch of old ladies gathered for a meeting. Nothing against the old ladies, but you've got the point....IT'S TIME TO RESTORE THE CHURCH!!! 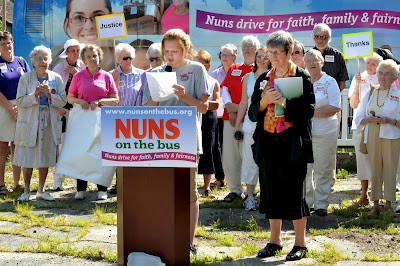 Posted by Agent Provocateur at 16:38